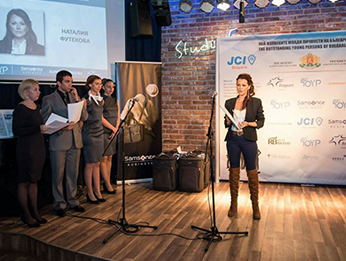 At a solemn ceremony in Sofia, Junior Chamber International – Bulgaria presented for the second consecutive year the awards of the ten most prominent young people of the country.

The 10 most prominent young people of Bulgaria in 2016 were elected by a prestigious 22-member jury. Among them is Prof. Dr. Natalia Futekova – Founder of ERP Academy. She won an award in the “Academic Achievement or Leadership” category.

All the winners are already nominated for the international format TOYP, where they will be evaluated alongside proven young people from around the world. The award of the TOYP awards began in the United States in 1938, and over the years it underwent a number of transformations. Since 1983, they have begun to take place in other countries where JCI offices are represented. With the TOYP award, celebrities such as Elvis Presley, Jackie Chan, John Kennedy, Henry Kissinger and others have been awarded over the years.

Jury composition: Dr. Anna-Marie Vilamovska – Secretary of the President of the Republic of Bulgaria for Innovation and Health Policy; Assen Vasilev – Minister of Economy, Energy and Tourism in the composition of the official government of Marin Raykov; Georgi Genchev – Creator and Head of the Information Portal for Non-Governmental Organizations in Bulgaria www.ngobg.info); Georgi Toshev – journalist, TV presenter, director, producer; Desislava Vassileva – Managing Director of the Communication Agency Adiya Pi Arnd Advertising and a partner in the Dea Solutions web agency; Detelina Smilkova – Vice President of the Higher School of Insurance and Finance (VUZF); Ivaylo Hristov – founder of Dev.bg; Yordan Yovchev – gymnast and chairman of the Bulgarian Federation of Sports Gymnastics; Jordan Nedev – member of the board of directors of the largest Bulgarian IT organization Sirma Group Holding and former director of BDZ; Chris Georgiev – Member of the Startup Foundation Foundation, organizer of Startup Weekend Sofia; Marina Stefanova – Executive Director of the Bulgarian UN Global Compact Network; Dr. Milen Vrabevski – founder and managing owner of Komak Medical – a private company for research and development in the field of clinical medicine; Miroslav Borshoch – Director of the National Palace of Culture; Nevena Mircheva – editor-in-chief of “Economics” magazine; Ovans Ovansian – founder of a business and training company, Web and Events; Plamen Russev – Member of the International Board of Honorary Ambassadors of Webit; Sasha Bezuhanova – initiator, founder and mediator of MoveBG; Svetlomir Pandaziev – Commercial Director of ATG AD; Svetoslav Georgiev – Vice President Operations of the American company C3i Healthcare Connections; Adv. Christopher Hristov – Partner at Penev Law Firm; Tsvetelina Yosifova – founder and director of the Red House Center for Culture and Debate; Tsvetelina Teneva – co-founder and senior facilitator of the Business Institute in Sofia.